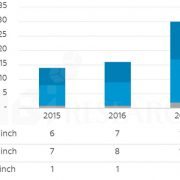 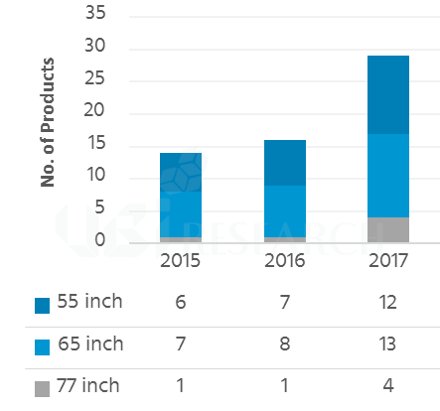 <Comparison of No. of OLED TVs by each year>

Meanwhile, OLED TV market led by LG Electronics, was taken attentions of publics when Sony decided to launch OLED TV first in the early of 2017. Sony which launched OLED TV first in CES 2017 to catch public’s eyes with “Acoustic Surface” technology that can make sounds without speakers, is leading the premium market with LG Electronics by producing 55-inch, 65-inch and 75-inch OLED TVs.

The number of OLED TV products are expected to increase in 2018 more and more. According to Flat Panels HD, Philips which launched only one model with 55-inch OLED in the early of this year, decided for releasing the 6 kinds of OLED TV such as 65OLED973, 65OLED903, 65OLED873, 65OLED803, 55OLED903, 55OLED803 and so forth. It is analyzed that the strategy is to aim at diverse consumers which divides OLED TV leading the premium TV market into high-priced line with 9xx model and low-priced line with 8xx model.

The shipment in 2018 is also expected to grow. In accordance with UBI Research, it expects that OLED panel with 55-inch and more will shipped over 2.4 million units in 2018, 9.1 million units in 2022. There is much attentions how OLED TV leading premium TV market will harden its positions all the more in 2018. 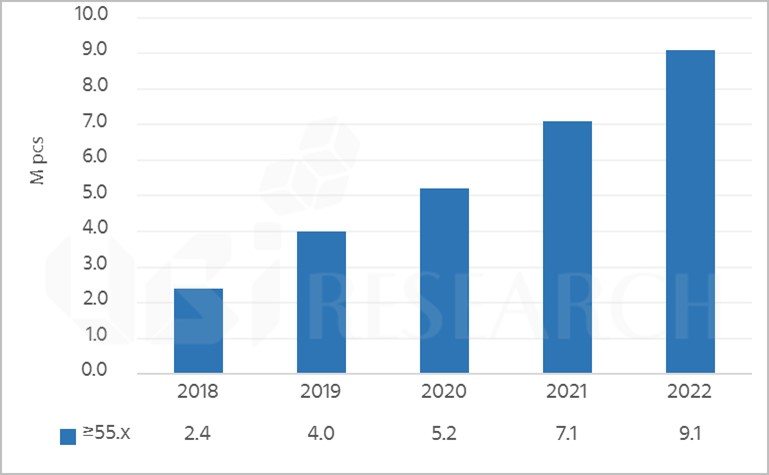