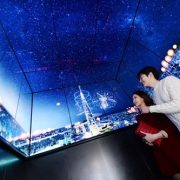 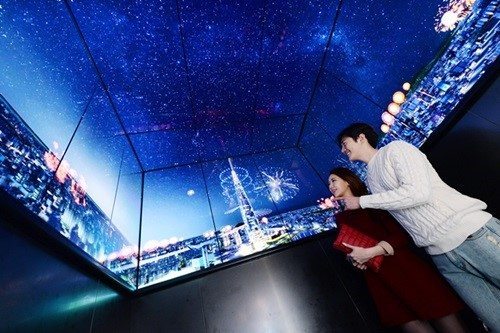 LG electronics decorates the best skyscraper with OLED signage which has the phenomenal image quality and design.

LG electronics installed 55-inch OLED Signage wall into Sky Shuttle which is an elevator for the observatory in Lotte world tower. The number of Signage, which had installed on two Sky Shuttles with double layers, is 60 in total. Sky Shuttle will begin operations from the end of March.

LG electronics covered three walls and a ceiling except an elevator door with Signage. With OLED Signage in all directions. It mesmerizes tourists as if they are in VR environment.

The video shows tourist attractions in Seoul as if it moves from the two stories below the ground to 118 above the one in the sky for a minute. It reaches Lotte world tower passing by Kyung-bok palace, the national assembly, and Jam-sil stadium. With the height of Sky Shuttle, which ascends 10 meters per second, the viewpoint changes as if it looks Seoul down making more realistically.

LG electronics created Signage wall which fits in an elevator using the advantage of OLED. OLED Signage displays the vivid color in any directions since it lights by itself with viewing angles. For this reason, it is the best for crowded spaces. Also, it shows the vivid image quality with clear black color.

OLED Signage is thin without backlight and it occupies less space for installation. It also weighs the half of LCD Signage of the same size, which means more customers are able to use the elevator. LG electronics ensure safety by making the whole Signage wall with tempered glass.

Lotte world tower has 123 stories and it is 555 meters above the seal level. It is the highest building in Korea, and the 5th highest in the world.

Sang-yoon Lee, a vice-president of B2B in LG electronics in Korea, said “we are introducing the excellence of OLED in the best skyscraper in Korea.” “We will also introduce the new value with the image quality and design of OLED, which is on a different level.” he emphasized.