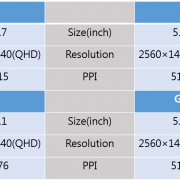 Galaxy Note 5 has 5.7inch QHD (2560X1440) AMOLED panel with Exynos 7422 processor and 4GB of RAM. With a curved back, it is easier to hold in hand. The thickness was reduced to 7.6mm from Galaxy Note4’s 8.5mm. Another new feature is having the S Pen popping out like a spring, and improved writing function. Additionally, even when the screen is off, memo app can be turned on by removing the S Pen.

As both products utilize Samsung Pay and wireless charging, it is analyzed that these features will continue to be applied to future products.

Samsung Electronics have been unveiling new releases of Galaxy Note series at IFA held in September each year. However, they moved up the release by approximately 1 month, and chose Lincoln Center, in New York, US, Apple’s playground, showing active response against iPhone 6S which will be released in 1 month.

Gear A, although anticipated to be revealed during this event, was not presented. It is now more likely that it will be shown in IFA next month.