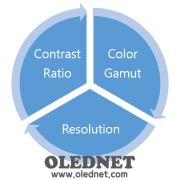 Began from a CRT, also called brown-tube, the TV market went through a LCD TV, a PDP, and a LED and finally reached at an OLED TV. The TV market with the history of almost 80 years now narrowed down to the war between a LCD TV and an OLED TV.

Theoretically speaking, it is genetically difficult for both a LCD TV and an OLED TV to become a better TV than a brown-tube as LCD realizes gray scale by adjusting the level of voltage from the liquid crystal which cannot completely block all light while the organic materials in OLED decompose when exposed to ultraviolet light not to mention the blue light.

Not deterred by these limitations, the LCD pushed out the rival displays of the brown-tube and PDP in the market, obtaining the honorable crown, and now it went on to prepare for the competition with a new display of OLED in full scale.

The picture quality of a display is determined by the three elements of contrast ratio, color gamut and resolution. 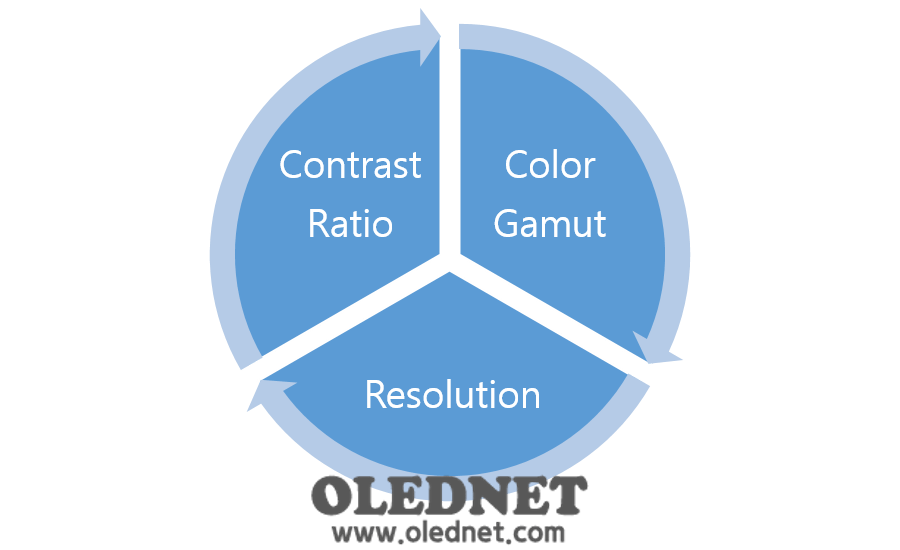 The contrast ratio is the most basic information necessary for recognizing an object developed as a human evolves for millions of years. The human eye can distinguish an object only with a black and white shape at night without the moon and it also perceives a three dimensional space as a distant object is the information resulting from the difference between contrast ratios. But the human eye gets tired faster than any other organs. When a human gets tired, he/she closes his/her eyes to sleep and this action is to block the light from outside. For the bright lights like sunbeam blind the human eye that is susceptible to light, it is critical to avoid the exposure to direct lights around the eyes by wearing a hat with a brim in the open air. The sunglass functions in the same purpose.

Thought an office area uses bright florescent lights as a human gets active in a bright place, a house requiring comfort, high-end restaurant, hotel, etc. are recommended to take the brightness creating the appropriate shadows according to the position of the right sources. It is because a human body relaxes and feels comfortable through the eyes in the adequately dark environment. Furthermore, the human eye cannot detect the intensity of very bright light but the degree of darkness can be distinguished easily. Therefore, a TV that is most beneficial to a human body is a product made with the display that fully produces darkness. That is the OLED TV.

LCD always employed the notion of resolution as distinctive marketing strategy when competing with a brown-tube and a PDP in the market. It is due to the fact that the display with the higher resolution provides more information and the picture and video express smooth images. Though LCD had poor contrast ratio and color gamut than a brown-tube and the price also was relatively high, it grew rapidly indebted to the diverse contents like MS Office and the development of internet.

The emergence of OLED which has superior contrast ratio and color gamut than LCD and even the resolution equivalent to LCD became the biggest challenge for the LCD panel manufactures which have already made a huge investment. As LG Display is the only manufacturer capable of producing a large OLED panel with the 4K resolution, it is very urgent for the TV manufactures to secure the highest possible quality LCD TV to compete with the LG Electronics’ OLED TV.

The LCD TV made with the BLU using the quantum dot (QD) material got one step closer to the OLED TV obtaining the 100% of NTSC which was only available for OLED.

The key is the contrast ratio.