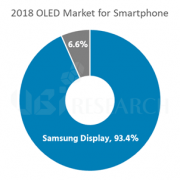 For rigid OLED, the utilization rate of rigid OLED mass production lines dropped in 1Q due to the keeping adoption of LCD in Samsung Electronics’ entry-level model and the decline in demand from Chinese set makers. For flexible OLED, its capacity utilization rate also declined due to falling demand from Apple and sluggish sales of Galaxy S series .

UBI Research mentioned, “In the first quarter of 2018, the sales were sluggish due to falling demand of set makers; however, the full-screen rigid OLED demand began to increase in April, and accordingly the utilization rate of rigid OLED production lines began to rise gradually. From June, the utilization rate is expected to recover to the previous year level. Also, the flexible OLED mass production lines will be likely to be in full operation since Samsung Electronics will start mass production of the next model and Apple will start mass production of new models.”

The OLED market for smartphones is projected to reach 4.4 billion units in 2018, and Samsung Display is expected to hold a market share of 93.4%. 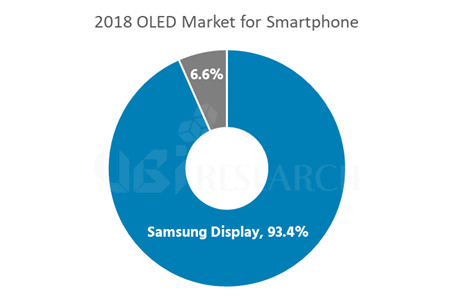 Market for OLED materials and components is forecast to grow to US$37 billion...
Scroll to top