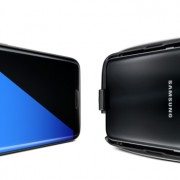 For a limited period only*, new Galaxy S7 and S7 edge customers in Europe will be able to purchase the Samsung Gear VR, powered by Oculus, at a special price and get free access to exclusive premium games and experiences, available from the Oculus Store. The bundle includes some of the Oculus Store’s most popular paid-for content, such as Anshar Wars 2, Darknet, Drift, Keep Talking and Nobody Explodes, Ocean Rift and Starchart.

This new reward, in partnership with Oculus, the pioneering virtual reality firm that helps to power the Gear VR, comes as the Galaxy S7 and S7 edge continue to perform strongly across Europe. This strong Galaxy S7 performance has also driven an upsurge of adoption in the mobile VR market in Europe. According to CCS Insight**, the Western European VR market is expected to grow 168% year-on-year in 2016. Samsung has already sold over 300,000 Gear VR headsets in Europe this year, a significant figure given that CCS Insight** estimates that the total number of VR devices sold in Europe last year was 1.8mn.

David Lowes, Chief Marketing Officer, Samsung Electronics Europe, commented: “Our Galaxy S7 and S7 edge are performing extremely well, demonstrating continued strong demand for our premium flagship devices. The smartphone is already so fundamental to our lives but connecting it with a product like the Gear VR opens up incredible new experiences that are often as emotional as they are immersive. With this new incentive, we’re encouraging broader VR adoption so that more people can experience this amazing new technology for themselves.”

“At Oculus, we want people to experience anything, anywhere through the power of virtual reality and we’re starting to see that happen with Gear VR,” said Max Cohen, Head of Mobile at Oculus. “We recently announced that one million people used Gear VR in April – this is an important milestone, which speaks to the great experience that Samsung and Oculus can deliver. Together, the hardware and software provides the absolute best VR experience on mobile available today and we’re looking forward to continuing to excite and engage European consumers.”

Industry analyst house CCS Insight forecasts that revenues for VR headsets globally will reach $10bn by 2020, with Western Europe accounting for $3bn. 4.7mn headsets are expected to be shipped in Western Europe in 2016, with value-priced smartphone VR headsets such as the Gear VR expected to account for 90% of the volume.

Ben Wood, Chief of Research at CCS Insight, noted: “We are at the beginning of an exciting journey with VR. We believe consumers will be keen to experience the wealth of professionally curated 360-degree content that will emerge in 2016. Furthermore, the growth in self-created content generated by the growing number of 360-degree cameras and shared via Facebook and YouTube will only serve to take awareness levels to new heights as the year progresses.”